Official day 1 started by rushing to the tube and catch the first train (ok i lied, not the first train though) to the King Cross Station to board the Virgin Trains East Coast to Edinburgh. My colleagues suggested me to take the low cost airline to Edinburgh for fraction of time of the train journey. Yes, it was great idea to take the short flight since I will only spend 24 hours in Edinburgh, but no. I insisted to take the train because I want to experience the English countryside and a high speed train.

The über-modern King Cross Station canopy with Lewis Cubitt’s elegant station facade of 1852. I was expecting a scene like in the Harry Potter. LOL.

While waiting for the board announcement of the platform for 9am train.

Average advance ticket to/fro London-Edinburgh would start at £25. First class would start somewhere £50+ one way but inclusive drinks and snacks. Open tickets would be £148.50 one-way or £297 on any train. There are off-peak rate, weekend rate.

I bought the tickets online, and way-way advance ahead. I am using the first timer 30% discount privilege once you sign up as a member of virgin’s train as well. 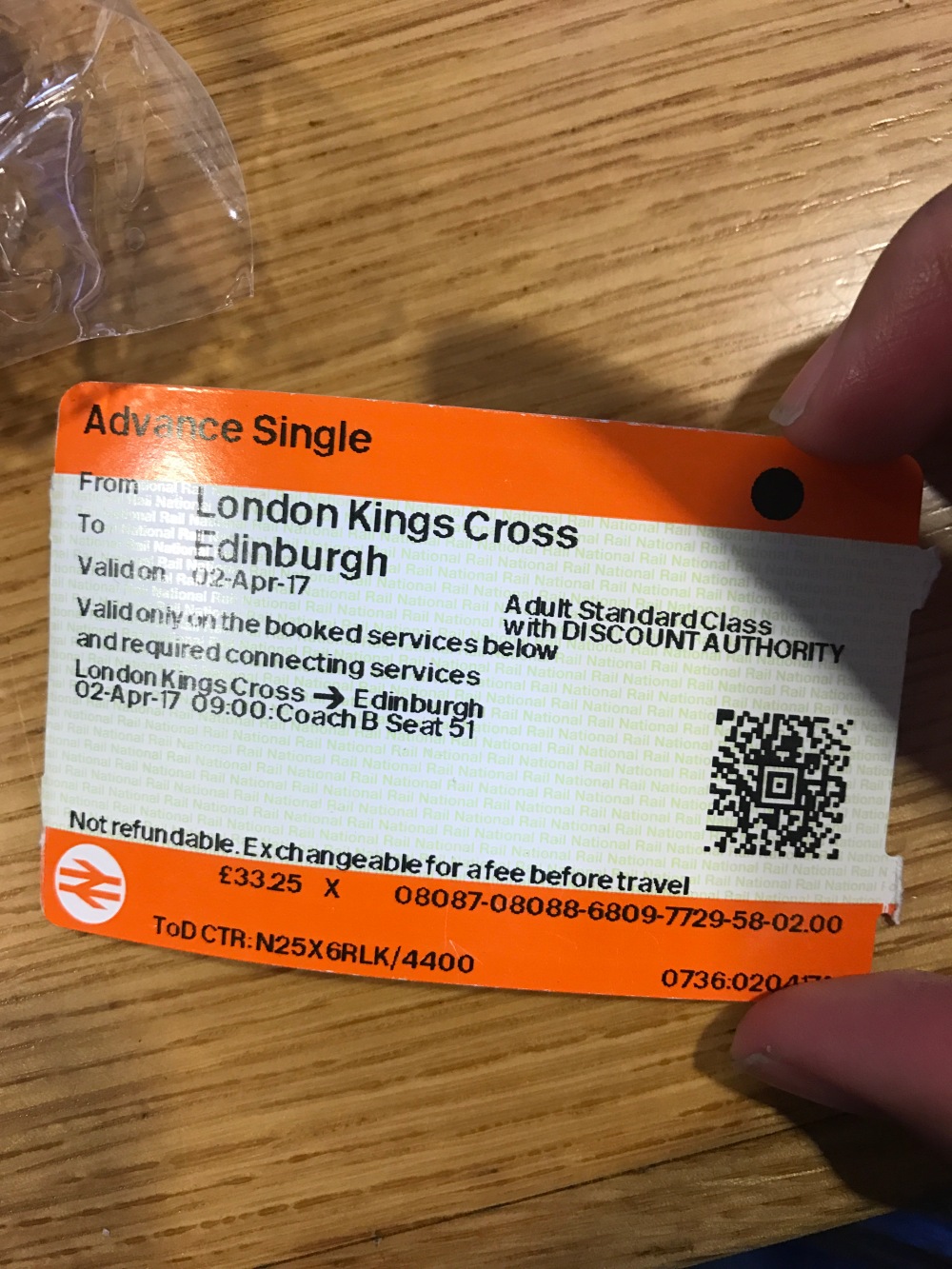 I bought my return ticket for £61.25. It is a 4 hours 20 minutes at 125 mph. The journey was fairly scenic as was still in the excited mood of travelling alone, on a train, to a foreign city. 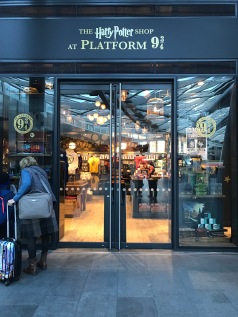 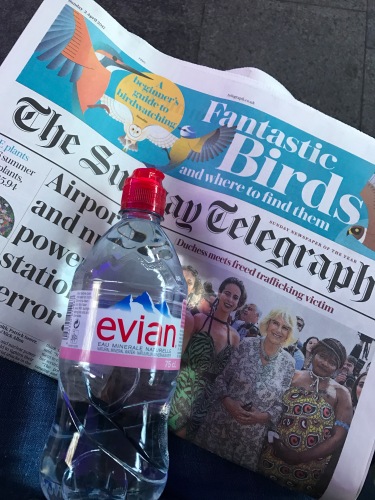 The usual, was early to the station, jet lagged and I woke up at 3 in the morning. I ate my breakfast at the station, bought my water (and newspaper, buy water free newspaper) and chocolates for the 4 hours journey and waited to board the train. Took all the touristy photos at platform 9 3/4. LOL. 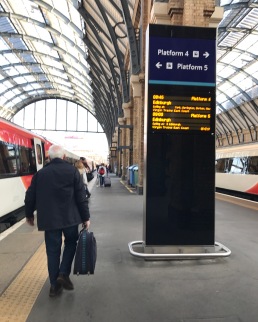 Train is amazing. Clean. Bright red. and it’s not full. Don’t know if business is not good or I travel at off-peak time. It was the weekend though.

I arrived at Edinburgh at 1.28pm. on the dot. Gotta give ya advice, them britons are punctual, even the train. 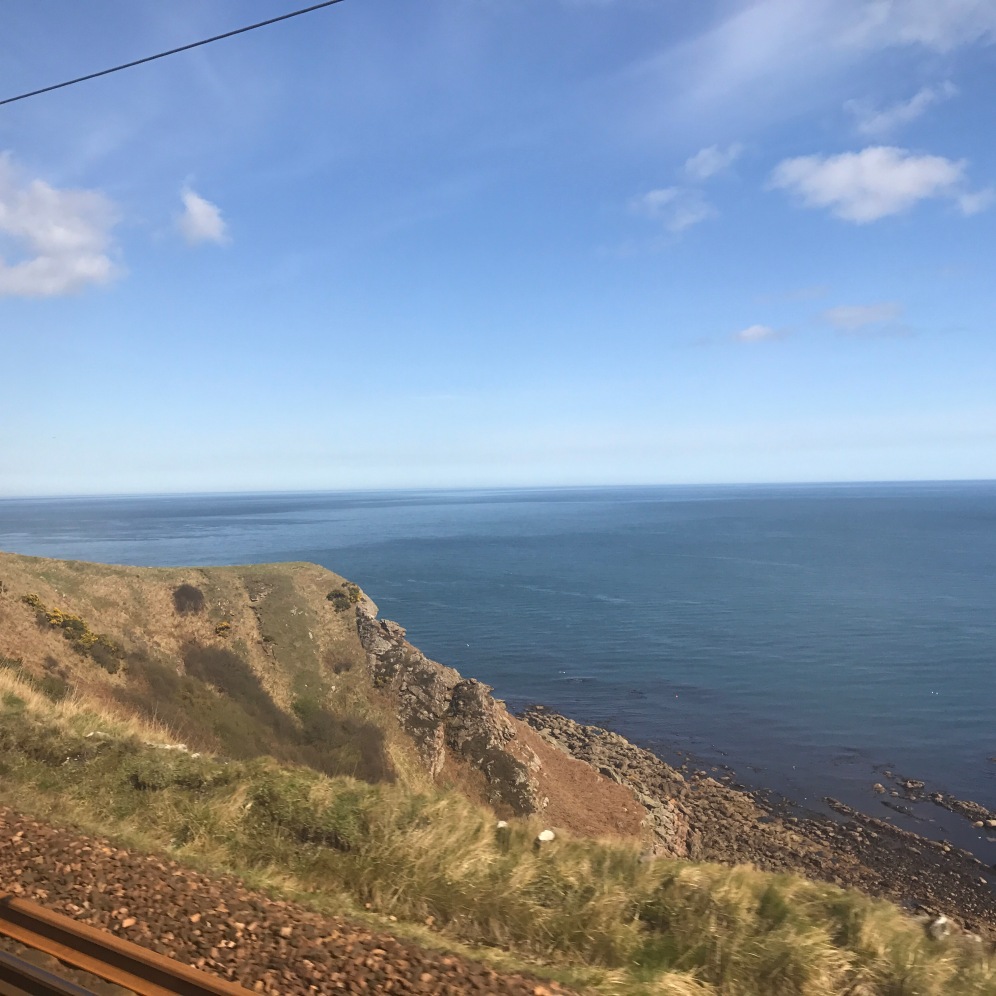 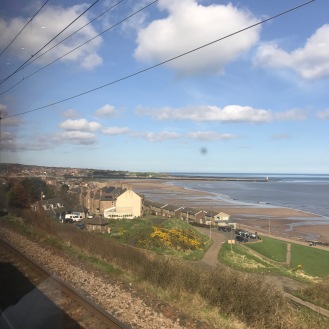 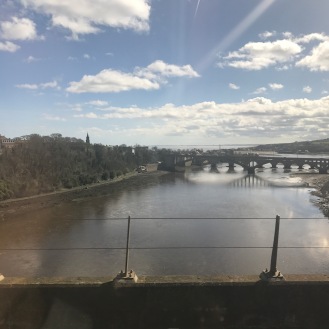 I booked a free walking tour from the SANDEMAN’s Edinburgh free walking tour at 2pm, gathered at the front of Starbucks of Royal Mile. It was just a 5 minutes walk from the train station. I quickly queue up at the starbucks to get my quick lunch and coffee before joining the group for the walk. I’ve done a SANDEMANs’ tour before in Amsterdam.

The 2.5 hours walking tour covers the old town part of Edinburgh. The guide is explaining the historical part of the city in a very jovial way. We covered Edinburgh castle (just the outside), St Giles’ Cathedral, The real Dr Jekyll and Mr Hyde, William Wallace and the stone of destiny, The Royal Mile, Heart of Midlothian, Greyfriars Kirkyard and Bobby’s ( I can’t believe I travel so far just to visit a cemetery but I understand the reason why now),  The Covananter’s Prison, Martyr’s memorial, National Museum, Scottish Writer, Grassmarket, THE ORIGINAL Hogwarts’ ( or at least where the inspiration of Hogwarts’s come from).

I won’t spare any details, you have to visit Edinburgh and experience it yourself. The handsome guide will explain on all the visit to the landmarks and places I mentioned earlier (and please tip them well too!).

I visited Voldemolt’s graveyard too !! Ok, Tom Riddle. A character that Rowling’s pick-up from the graveyard that I visited. 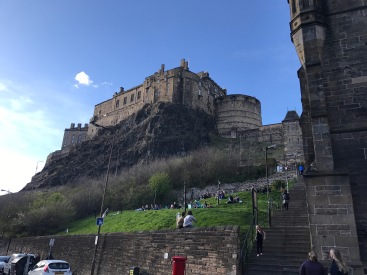 Edinburgh is a lovely old town. Everything is all medieval street layout, cobblestone, herringbone pattern, everything is imposed by the narrowness of the landform. There’s one block of building whereby called the ‘earliest’ highrise residential building where the richest of people would live at the first floor, and the poor would occupy the ground floor and the highest floor. The reason? Poor sewage are fire drill system. I can tell you in more detail over a coffee and cake. Call me up. LOL.

Part of the old town also filled with these studios, lighting, etc equipment for filming ‘Avenger’s Infinity War’ that time. I was so so excited.

As the tour ended just at 5pm. I walk my way to the hostel that i booked via hostelworld.com. I stayed at the Castle Rock, and voted the best hostel in the UK I guess. or was it the whole Europe. I can’t remember. But it was a steal! I paid like, £10 for a night, and the place looks like a castle. LOL.